I sat down with James Johnson who runs Katmai Trophy Lodge and Naknek River Camp.  James breaks down fly fishing Alaska for salmon, trout, and char.  Find out when the best time is to hit Alaska for a newbie and how to swing up chinook salmon.

We talk about StealthCraft Boats and why the honeycomb design is an added feature that keeps the boat Stealthy.  Find out how James got his start guiding in Michigan at one of the big Orvis lodges in the Midwest.

The StealthCraft Boats were noted here and is their company they recently sold.

The Orvis endorsed large that was that largest outfitter east of the Mississippi at the time.

Naknek River Camp is another destination spot that James helps to run and is owned by the family business.  James notes that the river rarely gets blown out.

Tom Brady is the only other job that James thinks that he would like to be doing instead of guiding.

Brooks Falls and the iconic bear photos.  Here’s a video of a bear catching a fish.

The power drifter is one of the goto motor boats by StealthCraft.

The Intruder is the goto fly up there.  Chartreuse, Chartreuse and blue, pink, and orange are all great colors for chinook. It wouldn’t be a good post without a Jay Nicholas video, so here’s your daily intruder.

The big tip on hooking up with chinook including how to feed line into the fish so you trigger a bite.

15lb Tippet of about 5 feet is about all you need.  If you can’t land fish on this then you don’t deserve it.

James spends a good chunk of time at their Blue Bonefish Lodge in Belize.

You can find James at Katmai Trophy Lodge.

James Johnson breaks down his life owning and running lodges in Alaska with a focus on King Salmon.  Find out how James has built one of the great Alaska lodges and hear some tips to get into a few more chinook this year. 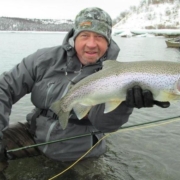 Ep. 12: George Cook on Alaska and the Popsicle 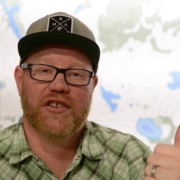