Fly fishing’s history grows with each passing day as new species and the techniques to catch them evolve. It is indisputable that its history lies in the pursuit of wild brown trout and Atlantic salmon in the UK. Consequently, no matter where you are from, where you began your fly fishing career or on what species, the desire to understand and catch an Atlantic salmon is always intriguing.

Today, for those new to the sport, achieving that dream is not so easy. Netting, loss of habitat, salmon farms, over-population and issues at sea that we do not even understand to this day are all contributing to a major downturn in the numbers of wild Atlantic salmon. So much so that some of those new to fly fishing question the sanity of those that still long to feel the take of a fresh salmon. It would be a tragedy to lose the interest and support of such a generation.

But there is hope and it lies on Russia’s Kola Peninsula on the Ponoi river which divides the peninsula in two, north and south, and takes the best of both. The Ponoi is probably the world’s most reliable Atlantic salmon river and remains in excellent health right up through the 2017 season. This is the story of three young fly fishers at different stages in their salmon fishing careers, each discovering that all is not lost for the Atlantic salmon and enjoying the three different runs on the Ponoi that can, and are often, caught all in the same day during the autumn season. Together they are charmed and seduced by the Atlantic salmon and its last bastion of hope, the Ryabaga Camp on the Ponoi river, and we witness their appreciation for what they are experiencing grow into a desire to see their children enjoy fishing for Atlantic salmon in the future. 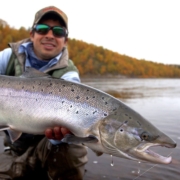