Joseph Rosano shares the history of steelhead fly design and development as a man who was side by side with some of the biggest names in steelhead history.  Find out how it all developed from Joseph, who was there with all of the big names of the day.

Find out why Joseph waited 35 years to start writing about all of the great names like Sid Glasso, Harry Lemire and the rest of the gang.  Find out what it was like being on the river as the intruder revolution was beginning.

– George Cook was on the podcast in episode 131 and talked about the history of NW Spey.

– The Thunder and Lighting was the first steelhead fly Joseph used early in his steelhead fishing career.

– Trey Comb’s first book Steelhead Fly Fishing and Flies was the first resource that had a big impact on Joseph’s steelhead future.

– Van Fleet’s Steelhead To A Fly was another great resource.

– Alec Jackson was one of Joseph’s closest friends and a person who had a large impact on NW steelhead fishing.

– Joseph has written for Swing the Fly Magazine and has a new article coming out in the summer of 2020.  Plus a photo essay with the Fly Fish Journal.

– The NW Atlantic Salmon Fly Guild was the fly tying group that brought together some of the big names in steelhead out of the Washington area.

– Ken Helvie’s book, Steelhead: Fly Tying Guide, has a lot of the great patterns from the day.

– The dependable fly pattern was a good example of what came out of the guild.

– A Queen of Autumm and a Gordon are two classic flies to check out.

– Trey Combs was on in episode 5.  We talk about the transition from Trey to the present day and everything in between.

3- Arthur Wood was noted here and a big part of the evolution in his work Greased Line Fly Fishing.

– Dave McNeese is writing the book on Siy Glasso.

– Klaus Frimor was on hear and talked about underhand casting.

You can find Joseph at JosephRossano.com.

Steelhead to a Fly by Clark Van Fleet

The Thunder and Lighting Tube Fly

Joseph Rosano breaks down the history of steelhead fly design from Trey Combs, through Sid Glasso and into the intruder revolution.  So much information that there is no way I can do it justice. 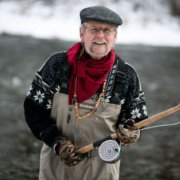