Shawn Holsinger from Holsinger’s fly shop gets into some fly fishing and fly tying tips with a focus on his local stream including the Little Juniata River.  We get into Euro Nymphs, stone flies and the Holsinger story.

Shawn shares some euro nymphing tips, how to get more efficient and is rule of thumb on proportions.  FYI – It’s pretty much half of what you think it’ll be.  Shawn stresses technique in fly tying over just copying the pattern.

Here is one of the Euro Nymphing podcasts with Devin Olson.

The Bugs and Beards Podcast is hosted by Shawn where they talk fly tying.

Trout Boomer and the Little J, by Bill Anderson, also the book Fly Fishing the Little Juniata River is good.

The Waltz Worm is a simple and effective pattern along with thread body flies.

Shawn has a bunch great youtube tying tutorials, but he recommends the Turd Stone and hot spot stone to start.

Kelly Galloup was on in this podcast and has some great videos on fly tying consistency.

Rick Hafele was on the podcast in this episode and noted that you should have a nice selection of 16 to #20’s.

Joe Humphries was on the podcast in this episode and talked about the importance of breaking your wrist while camping.

The Drake Cast episode and note on competition fly fishing.

Tim Cammissa, Tim Flagler, Jim Misiura, Mac Flies, and Fly Fish Food are all people that were noted by Shawn as good resources for fly tying.

The Renzetti Traveler is the goto vice.

You can find Shawn at Holsingers fly shop or on youtube here.

Music Highlight in this Episode

Shawn Holsinger shares some great insight and tips in this episode including his turd stone, the hot spot stone and how to improve your fly tying game this year.  He makes a great point to get out and meet new people if you want to take it to the next level.

#47 A Day in the Life of an Alaskan Fishing Guide 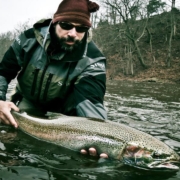