We cover Atlantic salmon and Newfoundland with Colin Mckeown who produces one of the most prolific fly fishing shows in the world – The New FlyFisher.

We get into a bunch of tips for A. salmon, find out what’s next for the New Fly Fisher and what hooking an atlantic salmon feels like.  Colin talks about how he has built a 50k following on youtube and why he does what he does.

Deli Fresh Design at DeliFreshDesign.com(use coupon wfs20 for 20% off)

The Tom Rosenbauer episode was my path in connecting with Colin.

The Linders Fishing Show – The Angling Edge  was noted when Colin talked about video production.

The New Fly Fisher youtube channel is one of the biggest in fly fishing.

Basics of nymph fishing is a good example of how they teach on the show.

The domestic geek was noted in the show as a mentor for Colin and his youtube channel.

Todd Moen has one of the biggest youtube channels.  Here’s a classic trailer that will get you pumped.

Seth Kugel was on the podcast to provide some frugal traveling tips.  Seth was the New York Times Frugal Traveler columnist.

The Riffle hitch video which includes a nice animation.

The Blue Charm and the Silver Tip plus the Green Highlander are three flies that work all of the time.  A Brown Bomber with an orange hackle is the goto dry fly. Here are the videos.

Simon Gawesworth was on the podcast in episode 9.

The underwater world of trout is one video that blew up that was super basic.

Joe Humphries was on the podcast here  and broke down is life in fly fishing.

The Cowboy Junkies Trinity Sessions and Rush plus Dazed in Confused.

The Jensens youtube channel is another channel that Colin is working with.

Squaretail is a new book that we discuss that is a brook trout guide in Maine.

The Atlantic Salmon Journal is a great resource to find out where to go and what’s new.

You can see all of Colin’s videos on youtube at the New Fly Fisher here.

The Hunt River Show and Dry Flies for Atlantic Salmon:

How to Tie a Riffle Hitch

The Lewis River for atlantic salmon on dries:

How to Tie a Brown Bomber

The Underwater World of Trout

Colin Mckeown from the New Fly Fisher goes deep on atlantic salmon fishing in Newfoundland along with what it takes to produce one of the great youtube channel.

We here why he likes to use a glove to handle fish and a few other interesting topics. 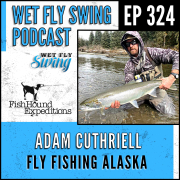 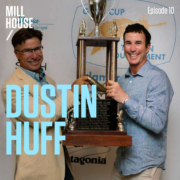 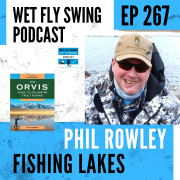