John Gierach breaks out an amazing episode in this one as he talks about how he came to become one of the greatest fly fishing writers in the world.  We also get into the hippie movement in the 60’s, death and Colorado fishing.

I could have gone for another 2 hours with John but had to respect his time.  I’m excited to share a little perspective into the life, times, struggles and stories of the great John Gierach.

John Shewey was on in episode 16 and talked about the process of writing.

Thomas McGuane said your only currency is your readership.  My currency is my guests as noted by John in this episode.

Tim Rawlins was on the show in episode 27 to talk about Spey Casting.

Trout Bum was one of John’s first books that he published.  He talks about how he has always just told stories.

Roger Angel wrote for the New Yorker – The essay This Old Man was noted by John and how he described a hand pistol.

The leaky roof at the end of one of the essay’s in Trout Bum.  See page 18 to hear the exact quote.

Ak Best was a big mentor who helped John really get started early on.  Ak’s Fly Box was one of Ak’s biggest books.

Fly Rod of Your Own is John’s most recent book.

Jim Teeny noted the article on the throwing rocks on fish and I noted the idea of throwing spoons out to get steelhead into range for the fly.  John didn’t recall what I was talking about.

The editorial piece on marijuana that John wrote for the local paper.

The Joe Rogan Podcast where the CEO of Tesla smoked weed on live air.

The hares ear parachute and a hares ear soft hackle behind it are his goto flies.

Alice Monroe tells a great story and a writer he follows along with Jim Harrison and Peter Mathison.

You can reach John at JohnGierach.com and find his upcoming books there.

I hope you enjoyed that episode with John Geirach as much as I did.  Did you catch the few times that I was completely surprised by John.  We went down a few rabbit holes unrelated to fly fishing including weed and the 1960’s.

But John also covered a bunch of topics related to the 20 great fly fishing books he has written over the years. 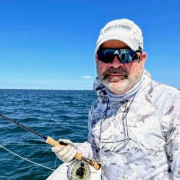 Episode 22 – At a Bar in Mexico… Pardon the Language

The Venturing Angler Podcast: Fly Fishing for Steelhead in Kamchatka with Justin Miller

5 Thoughts for Streamers on Small Streams