I interview Devin Olsen to talk about Euro Nymphing and the USA Fly Fishing team.  He provides a bunch of tips to help you get started with euro nymphing.

We cover the Provo River, the history of Polish Nymphing, Indicator leaders, Fly Fish Food and Dynamic Nymphing.  Lots of content in this one so enjoy!

Click below to listen to the Devin Olsen Interview:

The Fly Fishing Masters reality show and the connection with Ryan Barnes and Lance Egan.

The Fly Fishing World Championships are hosted all around the world.

The polish nymphing style blew up the world when it was first brought into the tournament.  Wladyslaw “Vladi” Trzebunia was a big mentor for Devin during the early days.

Indicator mono was introduced by the French and was part of the huge evolution in nymphing.

A Tippett Ring is a big part of the terminal tackle in euro nymphing.

Here are 2 videos on Euro Nymphing that are leading the way in this area:

Here are the links on Vimeo:  European Inspired Tactics and Beyond the Basics.

Click here to watch the video on a typical leaders setup for Euro Nymphing.  That video comes from Gilbert Rowley’s youtube channel.

Curtis Fry from Fly Fish Food was on the podcast in episode 40 and covered fly tying and the Provo River.

Sexy Waltz Worm is a goto pattern for Devin.  You can watch a video on tying this pattern here.

Phil Rowley was on the podcast in episode 34.  Check out the episode here on stillwater.

10.5 foot 3 weight is the goto rod for Euro Nymphing.  Click here to check out Cortland’s Euro Nymphing Rod at a introductory price.

Some of the 7 confidence flies noted as the best goto patterns:

The goto piece of non fly gear is Devin’s Sony A7R3 camera that he takes everywhere in a waterproof bag.

Dynamic Nymphing was the break through Euro Nymphing book at the time.

Tactical Fly Fishing:  Lessons Learned from Cempetition for All Anglers  will be out in 2019 but you can reserve a copy at the link above.

You can reach Devin at TacticalFlyFisher.com or on instagram at tactical_flyfisher

. Resources Noted in the Show

Tactical Fly Fishing:  Lessons Learned from Cempetition for All Anglers

This episode was packed with tips on Euro Nymphing and the best way to get started.  This comes from Devin Olsen who is one of the leading anglers in the world on this subject.

I really loved the history breakdown by Devin and hearing how it all came together from anglers who had very little gear to get started. 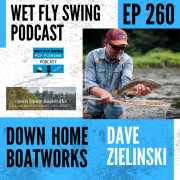 WFS 260 – Down Home Boatworks with Dave Zielinski – The Cicada Chaser

The Venturing Angler Podcast: Interview with Mikey Wier on the Work of California Trout