With so much COVID-related uncertainty, we had to keep Camp North and Napiarissat closed this season, and focus on the Erfalik-program. A long history of operating in Greenland eventually gave us the needed permission to open the Erfalik Lodge. Fortunately, travel within Europe also opened up enough to make it possible to host six groups at the lodge.

The lodge is second to none when it comes to fly fishing in Greenland, and during the down time in 2020 our partners added an extra building. Couples – or friends – now have the possibility of sharing a spacious double room, instead of staying in our small (but comfortable) single rooms.

Deep into the fly fishing on top of the world in our Travel section – og directly here;

Greenland – Fly Fishing on Top of the World

The Erfalik Lodge, with its latest upgrade – the green building on the left with the new, spacious double rooms.

I personally enjoy the tent life of Camp North and Napiarissat, but when I go to bed at the Erfalik Lodge, after another wonderful day – and in a real bed, that is – I don’t want to be anywhere else in the world.
A typical day starts out with bacon, eggs, toast, fresh fruit and a steaming hot mug of tea or coffee. It ends with a hot shower, followed by fishing stories and a drink or two in the lounge area, until our chef is ready with a hearty meal. Maybe, he has been collecting mussels at low tide, or mushrooms in the valley? Maybe it’s char sashimi or gravlax for starters? The main course might be reindeer, musk ox or a couple of fat cod, caught in the fjord in front of the lodge earlier that day. To claim that we’re always “living off the land” would be pushing it. But having a great time and eating well? 100% true!

Of course, all this comfort wouldn’t matter much if the fishing wasn’t great. It is. Even in a freak year, like the one we’ve just finished. 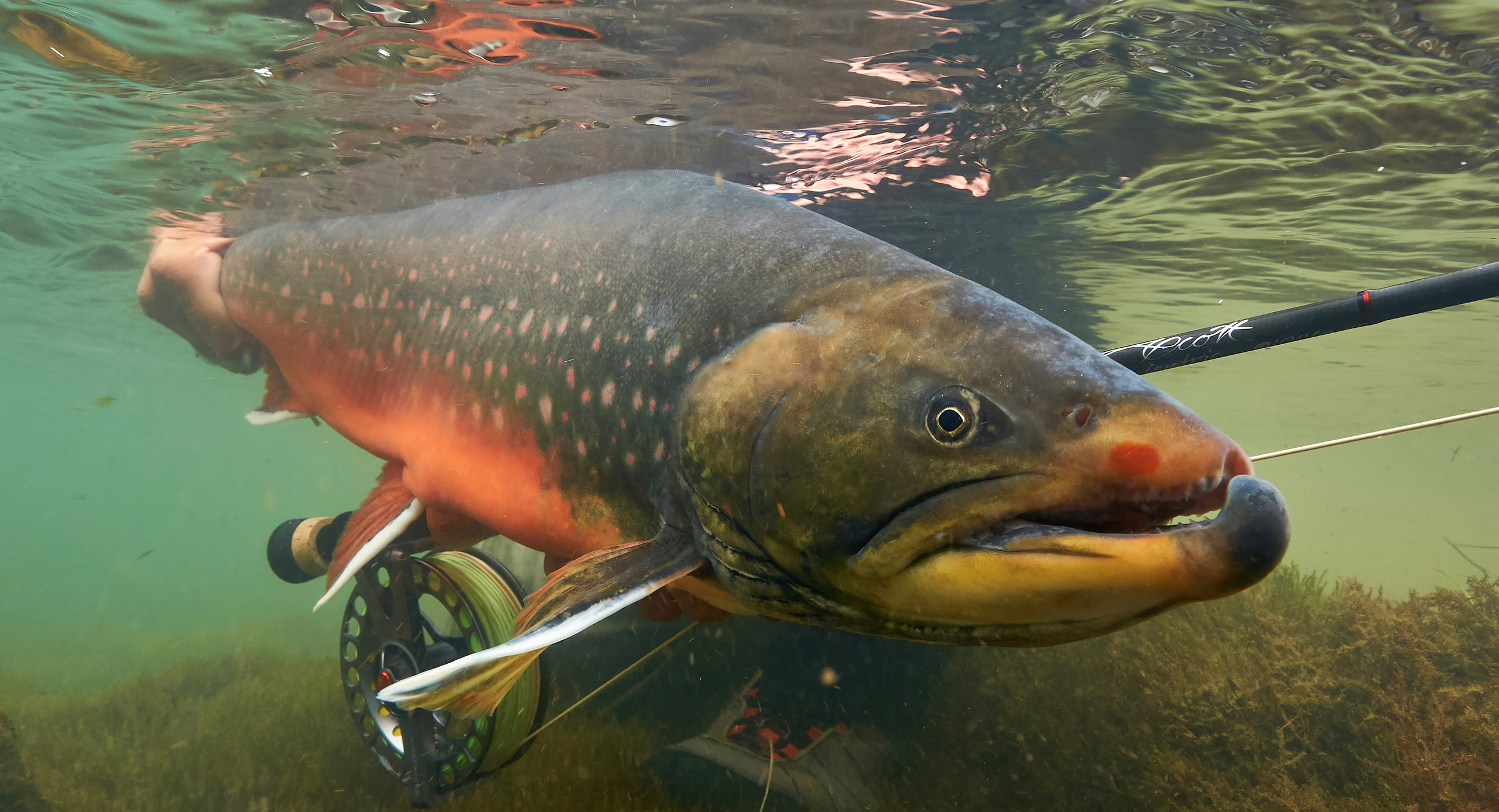 How great it feels to write these two words: Season. Report.

When our first group arrived at Erfalik Lodge on July 6, it was the first guests traveling with Getaway – to any destination – since March 2020. They had deserved a warm welcome. Instead, it was snowing as they arrived at the lodge! Not a lot, and not for long – but come on! In the fifteen years, we have been operating in Greenland, we have never seen snow in July before. Well, there’s a first for everything. 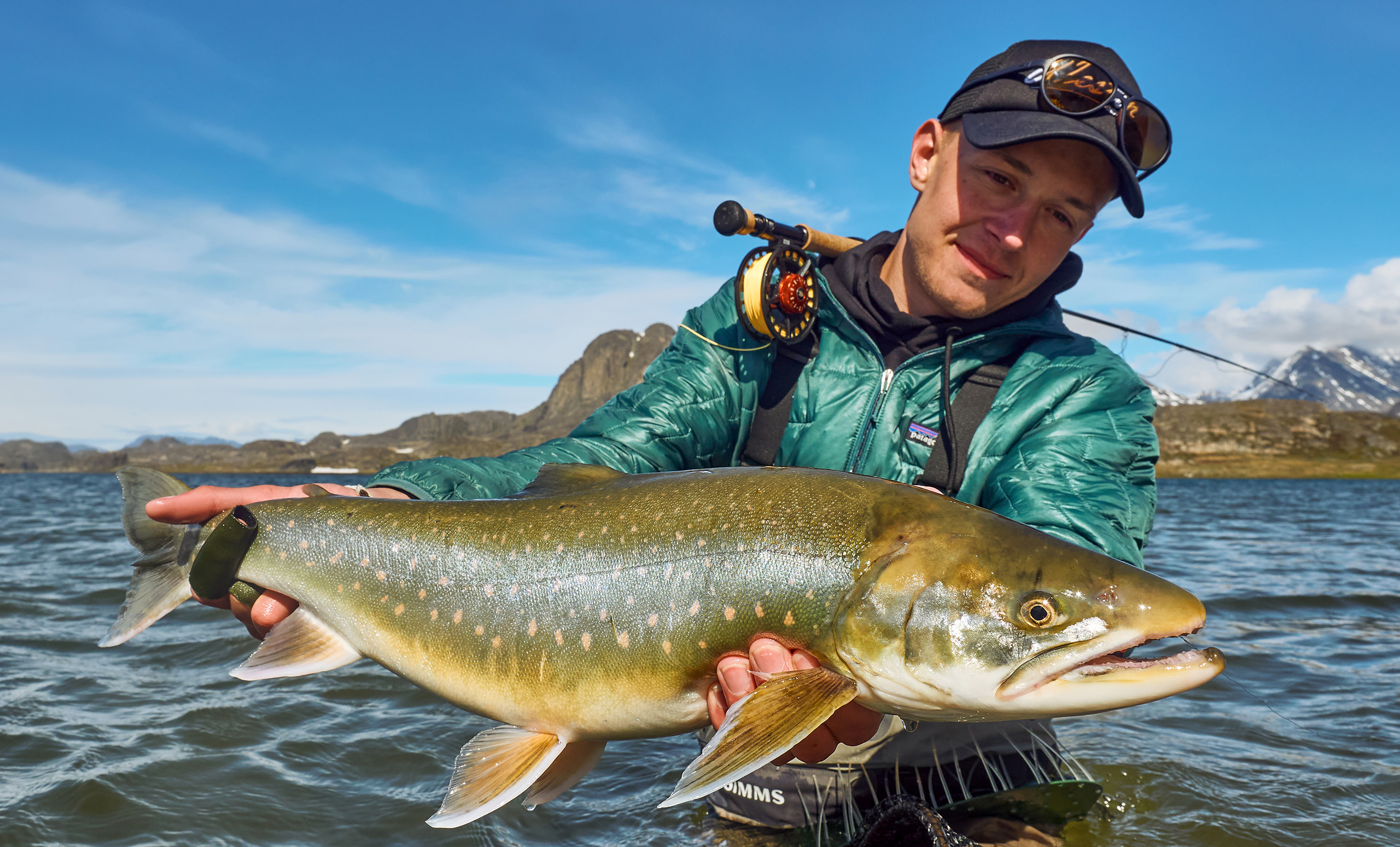 While the majority of Arctic chars were fresh out of the ocean during opening week, some had arrived early enough to have gotten a bit of colour.

The southwestern part of Greenland hasn’t seen an equally late and cold summer since 2005, and while the lower temperatures of 6-12 degrees are much better for fishing (and hiking) than the warmer weather we often see in July, it affected the arrival of the sea run Arctic chars. We have opened many a season on Erfalik finding a river stacked up with fish, thinking to ourselves, “Why didn’t we start two or three weeks ago?”

The answer is that we always try to play it safe. This year, that decision proved its worth. While the first group of the season caught a lot of nice, and very fresh chars, they had to work a bit harder, and with a more refined approach than what’s usually the case during opening week.

See all the greyish shapes, just below the surface? Yep, there was A LOT of fish in the lakes.

The two lakes between the river mouth and the main river were full of fish, and there were some great lake fishing sessions during the week. Most anglers are surprised about high strong a fighter the sea run Arctic char is. Hook one in the lake, and for some reason they fight even harder than in the river. Several long runs into the backing aren’t unusual when hooking a bigger fish.

The fresh chars that had already made it further up in the system mainly fell to big, orange foam flies skated across the river or, when they didn’t want to go on top, lightly dressed streamers.

Sometimes, you need to shout a little louder: Fresh char caught on a big, orange streamer.

During the first week, many fresh fish entered the river. Others made their way further up, to their next holding spots, typically moving in small schools of 10-15 fish. As the first group was replaced by the second, we were sure the fishing was going to explode the following week.

That wasn’t exactly the case. Sure, the second week also had its great moments on the river, and in the lakes. Those who fished hard ended up with an impressive tally of fish. Probably none more so than our French friend Pascal, who – though in his late seventies – had no problem covering a lot of water and landing between 10 and 20 good fish every day of the week. Maybe his previous visit to Erfalik gave him an edge? 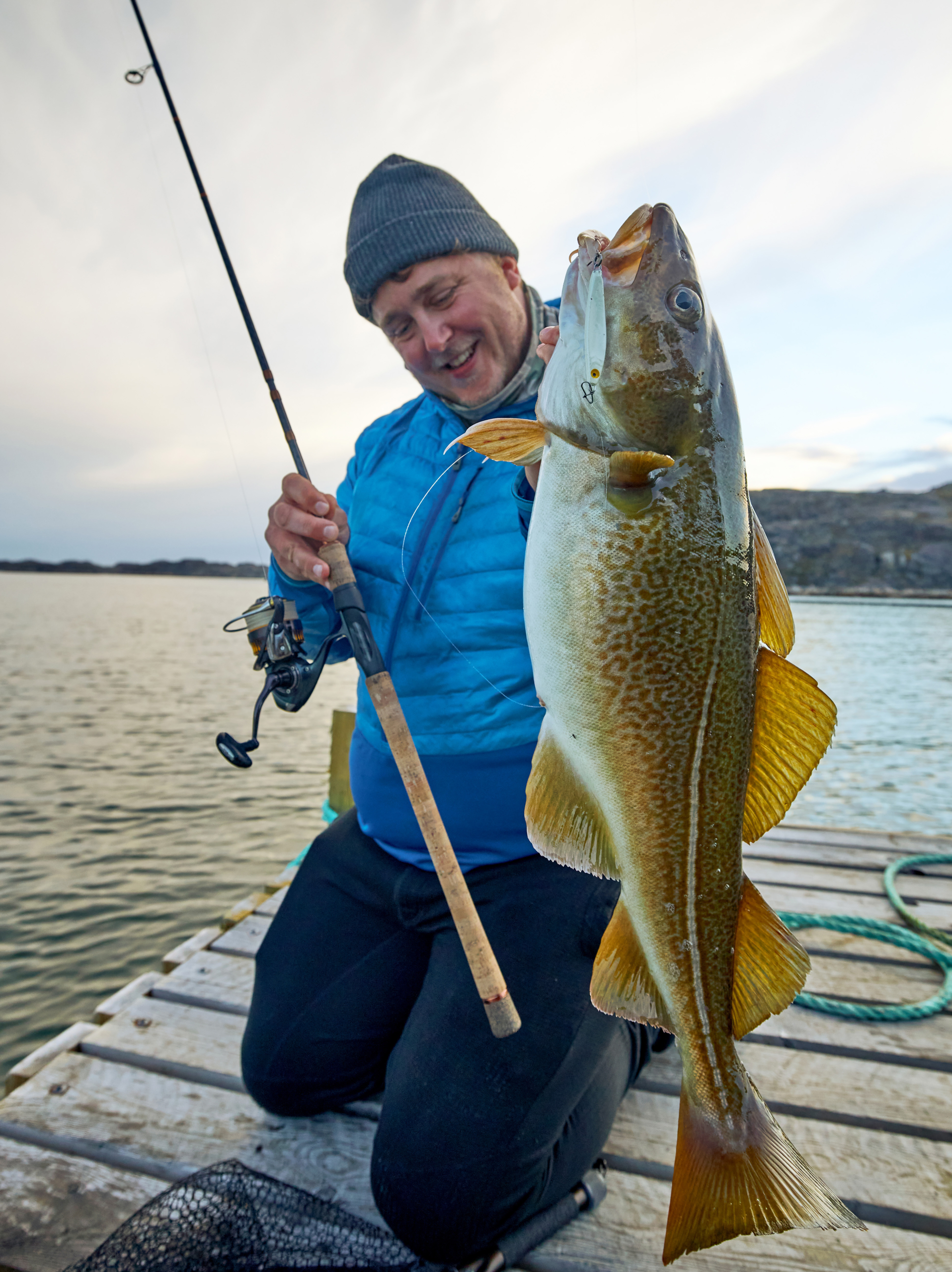 Nope, but a couple of nice cod caught from the jetty in front of the lodge makes great eating.
A couple of big fish one way past the 80 cm mark, were spotted from a high bank as they cruised by. The chars rarely eat flies while on the move, and these were no exception.

The third week of the season saw a return to colder temperatures, and even a light snowfall during the night. The temperature of the river was only around 7 degrees, and maybe that’s what kept the chars from chasing foam flies on the surface. Instead, small streamers like the Five Hair Fly outfished everything else.

Magnus, our chef for the week, knows Erfalik as well as anyone and landed somewhere between 100 and 150 fish during the hours where he wasn’t cooking up great food, Still, in general catch numbers were lower than usual for Erfalik. Even so, the week was a perfect example of slightly difficult Greenland-weeks still being great weeks. Several guests from this week have already written us, to let us know what a great time they had, and that they are already thinking about a returning to Greenland. They will be most welcome.

With fly fishing camps on Greenland’s three best rivers, we can still find you some open spots for next season. But don’t wait too long.

The coming months are usually see a good deal of next season’s bookings coming in – and because of the pandemic, many guests had to be rolled-over to 2022 so availability is already limited.

Interested? Read more about Getaway Fly Fishing and their three camps here – and get in touch here.

TO BE CONTINUED … PART TWO